The National Fire Prevention Association has announced free access to privately developed codes and standards. For any Makers or enthusiasts, this is great news! END_OF_DOCUMENT_TOKEN_TO_BE_REPLACED

To connect your Domino to a WiFi network using a GUI:

The basic interface (“Domino Web Panel”) is mobile-friendly; the “LUCI” tab, however, is still formatted for larger screens.

To connect to your local wireless network, choose “LUCI”, then “Network”, “WiFi”. Click “Scan” beside “Generic Wireless” and click “Join Network” next to your WiFi. Enter your password and hit “Submit”. Scroll to the bottom of the page and select “Save and Apply”. You can now access http://domino.local/ from your network.

To connect your Domino to a WiFi network using the command line:

Connect your domino by USB and open a terminal to it (/dev/ttyUSB0 on Linux or whichever COM port Windows assigns) at 115,200 bps. You will have root access just like any OpenWRT implementations. You will want to change the wifi-iface block in /etc/config/wireless to look something like the following (modify to suit your needs):

With the 3x USB + MicroSD expansion:
/mnt/sda1 is your microSD card
/mnt/sdb1 is your USB,
/mnt/sdc1 is your internal Flash storage

Getting a terminal on the Domino Qi (Arduino Yun Clone):

More goes here as I play around with it…

I purchased this little MEEP from eBay with a few other broken tablets. It has a fairly standard AllWinner A10 setup with lots of ports. HDMI out, Mic, Headphone, USB Wifi and front webcam, so hopefully it can be put to some use with a little playing around.

Sysconfig.fex for the MEEP tablet can be found here: http://pastebin.com/nBuunx3F

This is an information dump of the WiiMu A01 in hopes of instituting audio control with the OpenWRT firmware.

I was able to extract the root_uImage

My unit had the DAC markings sanded off, but from /proc/asound/cards, DAC appears to be an Everest Semiconductor ES8155. According to their product sheet, it is a 2-channel DAC in QFN-28 package.

I recently purchased a WS2811 RGB LED strip for PC case modding purposes. I will be making an ATMega-based controller for it, so I decided to use an Arduino for testing and prototyping.

I found two libraries capable of driving this strip:

Plus many great links regarding the WS2811 at the Noisebridge Wiki.

I recommend trying out funkboxing’s FastSPI2 effects as great examples of using the FastSPI2 library. You will need to use the line LEDS.addLeds<WS2812, 13, GRB>(leds, NUM_LEDS); to properly initialize the code.

To convert your eeprom.bin for upload via BusPirate

After installing a new furnace and thermostat, I was left with an old thermostat that was controllable by the power company to allow them to shut off the A/C remotely during high-load time, and allows users access to set their thermostat online

The Cannon Technologies Inc “ExpressStat” board (Rev M) has: 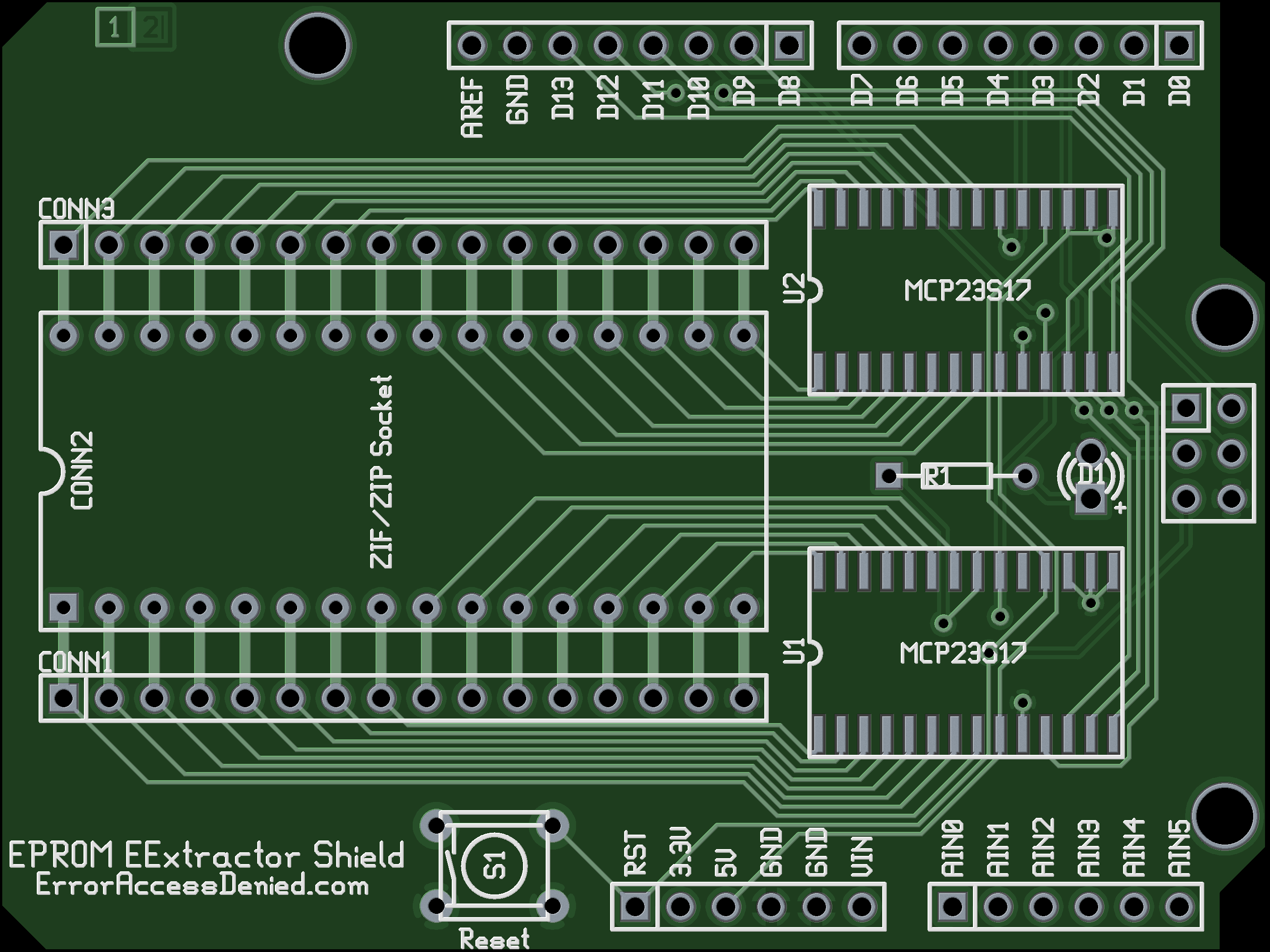 Purpose: EExtractor is an Arduino-compatible Shield that allows a user to dump (or download) the contents of a ROM chip (ROM, PROM, EPROM, EEPROM, etc).

Hardware Method: The EExtractor uses two SOIC MCP23S17 ICs to control the 31 (32 minus ground) pins of the ZIF Socket. This (ideally) allows the user to address any size or pinout of PROM IC up to, and including, 32 pins. Headers are broken out to allow for direct powering of PROM pins from the Arduino’s +5V port (if needed).

Software Method: The Arduino (or compatible) software will correctly configure pins (inputs/outputs, Hi-Z, pull-ups, etc) to allow for proper reading of the IC’s data. The software will then proceed sequentially through each byte of the PROM, outputting it along with a verification or checksum.

(The code is still under construction at this time.)

Availability: PCBs will be available once testing is complete.

EExtractor was made using the Open-Source gEDA suite of tools, including gschem, pcb, etc, and, as always, a little symbol and footprint help from gedasymbols.org.

All materials, schematics (.sch), PCB Layout (.pcb), and related derivatives such as PCB renderings, schematic renderings, .ps, .pdf, .gbr and .cnc files, or other Gerber-format files and PCB boards produced with them, collectively known as v1.0 Beta 1, are released under the CC BY-SA 2.5 Canada license.

*EExtractor is not sponsored or otherwise supported by Arduino. The Arduino name used only to signify compatibility.

This article will document the process of making OpenWRT work on the DIR-615 rev. A1.

In the GPL’d source code available from D-Link [FTP], in DIR-615A1-GPL.tgz (inside the downloaded file), in Noahsark/platform/MVL5181/linux/arch/arm/mach-mv88fxx81/Board/boardEnv/DB_88FXX81/mvBoardEnvSpec.h, a search for “RD-88F5181L-VOIP-FE” reveals a list of constants that pertain to the board. (See attached .XLS file)

I created Board ID# 4262 at the ARM Linux website to describe this board.(This document from Nas-Central.org explains why this needs to be done, and goes into detail about how to get support for your particular Orion board type in the mainline Linux kernel. This only ever needs to be done once for each type of board defined on the ARM Linux site, so consider it “already done” for the D-Link DIR-615 and/or the Marvell RD-88F5181L-VOIP-FE reference board.)

Update (25-Jul-2012): I just received my Dangerous Prototypes Bus Blaster to allow me to use JTAG with either OpenOCD or urjtag, among others. It seems that the resistor and capacitor footprints beside the JTAG header need to be populated to allow JTAG access. Proper SMD resistors and caps are part of my next DigiKey order.

Attached to this article is a log of one of these so-called “failboots”. It can be easily identified as it only one block of text following the BusyBox ash shell:

A successful bootup (log also attached) is followed by much more serial chatter, such as bringing up interfaces, mounting flash, etc.

To recover your device:
(Warning: This might damage your device; however, if you are in need of these instructions, I don’t think it’s possible to damage it any more.)

2) With an Ethernet cable, connect the DIR-615’s WAN port to one of the LAN ports of another router, as it doesn’t play well otherwise. (It seems to need an intermediary to handle ARP tables for it while bricked like this)

3) Power it on, let it boot up, and over the serial connection to the router, run “ipconfig eth0 192.168.1.25” or some other memorable IP address that’s in the same subnet as your computer

4) Again, over serial connection to the router, run “tftpd”

5) On your computer, download the firmware from DLink: ftp://ftp.dlink.com/Gateway/dir615/Firmware/dir615_firmware_100.bin

6) And with a tftp client (See Installing OpenWRT via TFTP (Bootloader contains TFTP Server)), upload the .bin file to the router.

The key, I believe, lies in installing a version of firmware that is not currently installed, so as to erase all NVRAM settings. If you try to reinstall the same firmware, it will not clear the device’s (faulty) settings. In other words, there may be a much easier way to debrick the device, however with the limited (and possibly corrupt) BusyBox commands, I took the first viable option I could get.

I hope this works for you as it did for me, but as usual, ‘no promises’.