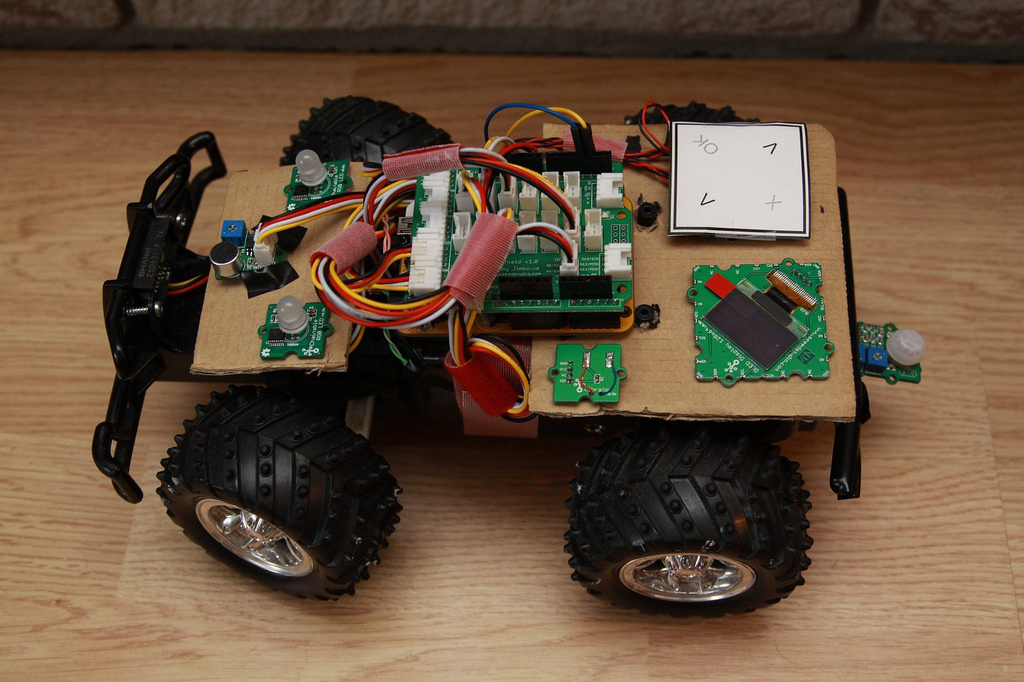 This is gRover, the Grove-Platform Rover; it is a general, all-purpose rover for house exploration.

This page is a bit of a mess, I’ll admit. The PDF file attached is much neater and contains much more information about the project than this page’s text does. For more pictures, see the gRover Flickr Photoset. This rover build uses parts graciously provided by Seeed Studio.

I purchased an RC car from the thrift store for $2. It had no remote control to go along with it, but it did have a 4.8V Ni-Cad battery pack, a chassis, a steering motor, and a drive motor. While the 4.8V Ni-Cad battery does not have enough voltage to power the I2C Motor Driver (it may be useful in another project), the motors and chassis provide a great base for a robot.

To me, this build was more about making a framework that other users could utilize to easily use the Grove platform to make a rover. I created gRover with the following (easily-modifiable and easily-expandable) features:

For more information, please see the attached PDF file. The code (which is ~1850 lines long, including lots of comments) is attached as a ZIP file.

The code is CC BY-SA licensed to the extent possible, given that the code has minor sections taken from example code from the Seeed Studio wiki (links are available in the PDF and in the code headers), and for the Touch Sensor Twig, from Rory Nugent (cited in the code).  If I have missed a citation, please let me know.

The documentation PDF is CC BY-SA.