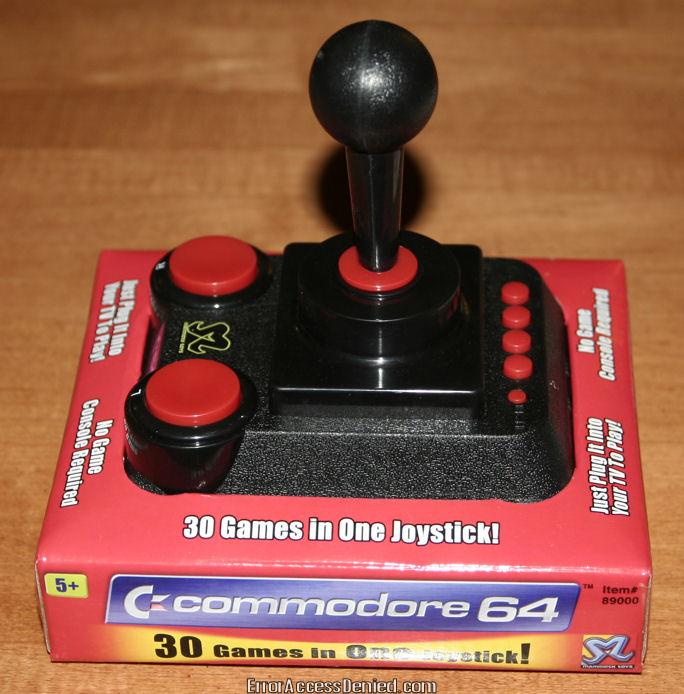 This is my new, snazzy Commodore 64 Direct-to-TV 30-in-1-games joystick. I ran it, played some games, now it’s time to hack it up!

The C64 Direct-to-TV, called C64DTV for short, is a single-chip implementation of the Commodore 64 computer, contained in a joystick with 30 built-in games. The design is similar to the Atari Classics 10-in-1 TV Game.

Tulip Computers (which had acquired the Commodore brand name in 1997) licensed the rights to Ironstone Partners, which cooperated with DC Studios, Mammoth Toys, and The Toy:Lobster Company in the development and marketing of the unit. [1] QVC purchased the entire first production run of 250,000 units and sold 70,000 of them the first day they were offered. Coincidentally, QVC’s West Chester, Pennsylvania Studio Park headquarters once were Commodore’s offices.

The circuitry of the C64DTV was designed by Jeri Ellsworth, a self-taught computer chip designer who had formerly designed the C-One.

The C64DTV runs on four AA batteries. It has two fire buttons, four function buttons, and composite video and monaural audio outputs. The internal hardware is a clone of the C64 and thus has the same features and limitations, but it lacks the keyboard and I/O ports. The internal circuit board has exposed solder points for floppy-drive and keyboard ports, and detailed instructions for adding them are available.

There are two versions of the C64DTV. The first appeared in late 2004 for the American market (NTSC television type), and has these features over the original C64: